Home
Bowling News
Fun and fundraising collide in the alley

Oct 17 • Feature Story, Local News • No Comments on Fun and fundraising collide in the alley 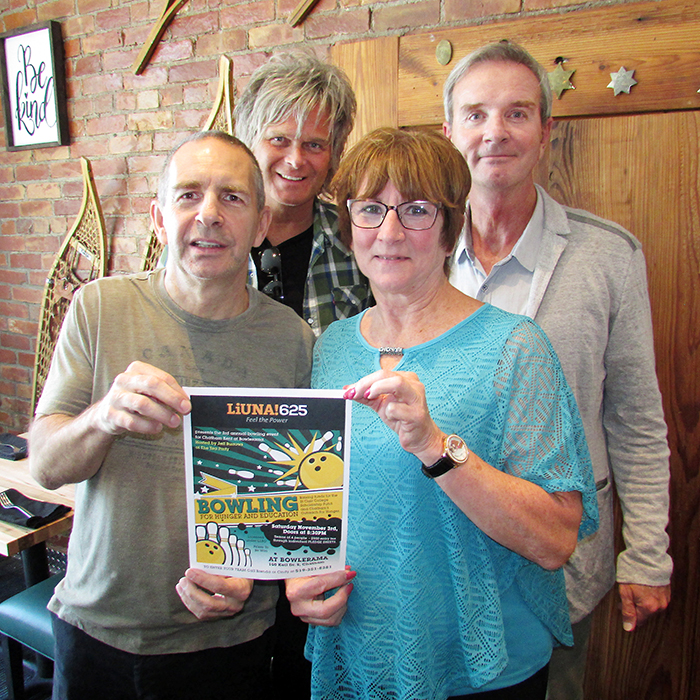 The brain food brigade is back at it for St. Clair College and Outreach for Hunger.

Organizers of the third annual Bowling for Hunger and Education hope for another great event Nov. 3, after raising $15,000 last year for the St. Clair College Scholarship Fund, and to help stock the shelves at Outreach.

Jeff Burrows of St. Clair College is the lead hand in the fundraising effort. He said the first two years saw the event grow exponentially and looks forward to this year’s offering at Bowlerama.

“I think we’re in good shape,” he said. “At a minimum, we’ll have the same number of teams last year (12), but I think we’ve prospected well.”

Burrows, who is also well known as the drummer in the Canadian rock bands the Tea Party and Crash Karma, is teamed up again with fellow organizers Brenda LeClair of Outreach for Hunger, Bruce Cockburn of Bowlerama, and Paul Haslip, formerly of RBC.

“Small businesses are using it as a fun staff night,” he said.

Burrows said all of the funds raised, and there are no administrative costs or even a cost to rent Bowlerama as Cockburn donates the venue, remain in Chatham-Kent. The scholarship cash goes to help Thames Campus students, while the money for Outreach for Hunger helps that organization feed those in need.

LeClair said the help is appreciated, as the event takes place between Thanksgiving and Christmas, two of their best times of donations. But the well in between can be deep.

Outreach personnel look forward to helping with the event each year. They are involved in collecting the money from participating teams and organizing raffle items.

“We keep the ‘fun’ in fundraising,’” LeClair said. “This will grow in the future.”

Haslip agreed there is no shortage of smiling faces at the event.

“It’s fun to see everyone come out and really enjoy themselves,” he said. “It’s a fun night that supports two great endeavours.”

Burrows, also a former radio DJ who spent a great deal of time in Chatham-Kent in that profession, came to know a number of citizens in the community over the years. He said when he first thought about putting on Bowl for Hunger and Education, he knew just who to approach for help.

“I had my people in mind,” he said, referring to LeClair, Haslip and Cockburn.

Haslip said the fact Cockburn donates the alley on a Saturday evening is greatly appreciated.

Cockburn said he enjoys the event and is proud to be part of it.

“Everything is tied to education. Without education, poverty is your next step in so many cases,” he said.

On event night, teams mainly bowl 10-pin. But as the numbers have outgrown the number of 10-pin lanes at Bowlerama, some wind up doing 5-pin, Cockburn said. Burrows said it works out well, as some prefer the 5-pin.

Haslip said the event trophy, featuring a bright white bowling pin, is all polished up and ready.

Anyone interested in participating can contact Outreach for Hunger at 519-351-8381. Burrows said participants can register right up until the start of the event.

And if you don’t bowl, you are still welcome. Burrows encourages people to come out and take part in the raffle and be part of the fun.

“Last year, a Windsor lawyer walked in with his family. They didn’t bowl, but he handed us a cheque for $500,” he said.

Cockburn confirmed Cosmic Bowling will be in full effect again this year, featuring glow-in-the-dark bowling and lots of high-energy music.

About the Author: Bruce Corcoran

Bruce Corcoran is a veteran writer, editor and broadcaster, having spent more than two decades in the media industry.
His news articles and opinion pieces have appeared in various Sun Media publications, including The Toronto Sun, London Free Press and Chatham Daily News; as well as The Toronto Star; National Post; Metroland publications; and The Canadian Press. His radio news stories have been aired via Broadcast News to radio stations around the country.
Bruce is a five-time Ontario Newspaper Award finalist for news reporting and opinion and analysis writing.
A Humber College Print and Broadcast Journalism graduate, Bruce spent more than a decade in the Kawartha Lakes region of Ontario before moving to Chatham-Kent in 2001.